is a Valencian and Catalan dish made with cuttlefish (or squid) and rice, somewhat similar to seafood paella. Black rice (arroz negro) is popular along the entire Mediterranean coast of Spain, but specially in Castellon de la Plana, the extreme north of the Valencian Community, and in Tarragona, the most southern area of neighboring Catalonia.

The traditional recipe for this dish calls for squid ink, cuttlefish or squid, white rice, garlic, green peppers, sweet paprika, olive oil and seafood broth. However, many cooks add other seafood as well, such as crab and shrimp.

Arroz negro is often served with the Spanish garlic mayonnaise sauce, alioli, just like a lot of the rice dishes to be found here on Spanish food. The garlic in the sauce goes well with the garlic rice and keeps the dish moist

While some people do expect to get a ‘fishy’ taste, the Arròs negre is nowhere even close to that. It has a far more delicate taste which stays uniform from first to last.

This is the first of a series of paella recipes that I am gonna talk in my blog.

My name is Daniel Salvador and I am a chef. In this site you will find information about who I am and what I do. The activities and services I offer range from private dinners at the customer’s home, cooking lessons, a supper club, paellas service. 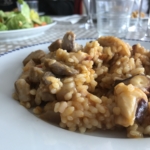